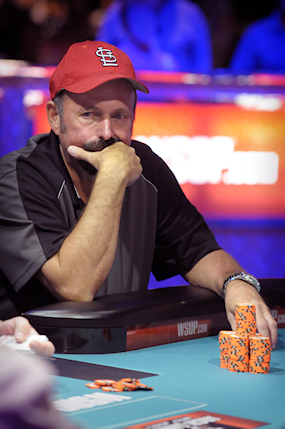 As an account manager for a commercial trucking company, in St. Louis, Missouri, Dennis Phillips began playing poker in 2004; mainly playing in small tournaments throughout the Midwest. Dennis won a seat at the 2008 World Series of Poker through a satellite tournament at Harrah’s Casino in St. Louis, Missouri and reigned as the “Original Chipleader” for WSOP through its 117-day hiatus until finishing 3rd at the final table in November.

Prior to his life-changing run at the 2008 World Series, Phillips cashed in two side events at WSOP Circuit stops at Grand Tunica in Mississippi. These money finishes prepared him for the tournament performance of his life, in the 2008 Main Event.

2009 WSOP was another success for Dennis Phillips. As he approached the ‘09 WSOP, he realized it would be nearly impossible to repeat his prior year success, especially with other pros telling him that he would have a “target on his back” – yet, DP once again found success at the World Series of Poker event, finishing 45th. With back-to-back top fifty finishes, this set a WSOP record – outlasting 13,290 players over the past two years!

Through Dennis’ regular-guy persona, he has earned the respect of pros and amateurs alike. His interest in the game and for the people who play the game has in many respects applied an “Ambassador” title to his name. With the growing interest in the sport of poker, his fan-base grew and the interest in the pokers biggest tournament was heightened by the presence of Dennis Phillips who brought over 300 friends and family to Vegas with him in 2008 and again in 2009. Dennis continues to have the largest group of supporters for a single player.

His red St. Louis Cardinals baseball cap and white shirt became an abiding symbol of the 2008 WSOP – an everyman that can make it to the big time.

Today, along with playing poker, and selling trucks, Phillips takes his poker experience to the airwaves with his radio show “The Final Table”, which is co-hosted by radio veteran Paul Harris. The Final Table is a compilation of highlights from tournaments and cash games, strategies behind the game and interviews from other poker professionals from around the globe.

As a new ambassador to the poker world, Phillips makes every concerted effort to see that he is able to give back to his community and his favorite charities such as the National Multiple Sclerosis Society, Pujols Family Foundation, Juvenile Diabetes Research Foundation and the Prevent Cancer Foundation. To Phillips, this is a vital part of being able to play the game… and his way of celebrating his success!