Tunica, Not Pre, Not Post, but During – By Susie Isaacs

I have told ya’ll about our Tunica sojourn before and after. This entry are from my notes that were just too good not to jot down. We did have fun and a lot of laughs.
There is a young dealer at the Horseshoe in Tunica we’ll call Margo because that is her name. She is very outgoing and full of fun. She has a distinct and loud voice, even when talking to someone sitting very near her. One day as she left the box, Soft-spoken Richard came in.  He said, to no one in particular, “I don’t have the same vocal power as Margo. Sometimes that is good, sometimes not-so-good, but I’d hate to be trying to escape from someplace with her!”
After losing a big pot, John stated, “Things happen for a reason. Sometimes the reason is you act stupid and made bad decisions.” 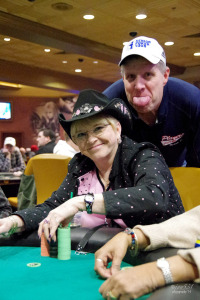 On the Senior Poker Tour Team is team member Mark Kroon. If you have ever played poker at his table you will always remember him. He is a true master of the table talk. I don’t know if Mark is using this to get a tell on his opponents or if he is just the “class clown”, but entertaining, he is! His lovely mother, Marilyn was in Tunica with him. When tables break or a player is moved she is very verbal in her request NOT to put Mark at her table, and if that happens, she can be heard to say, “Here we go.” She is about quiet as a church mouse unless someone speaks directly to her. If Mark acts up and a player looks at Marilyn as if to blame her for giving birth to him, she just shrugs her shoulders and rolls her eyes. At one point, Mark had been “carrying on” and on and on. A player asked Marilyn, “Can’t you do something? You need to take him over your knee,” to which she responded, “I have tried everything. I have taken him over my knee in years past, I have hit him in the head, I ever divorced his father – nothing worked!”
A player I nicknamed, “King” because he is a chess champ and uses a chess King for his card marker, was completely unresponsive to me one day, after being outgoing and friendly the night before. I realized he had earplugs in. He removed them and explained, “Mark Kroon defense system!”
King says that the greatest thing about the game of Chess is that there is no fudging river!
At one point in one of our seniors events, the conversation was of things and places we all remembered.  One subject was outhouses and slop jars. I tweeted about that. One follower wrote back, “What’s a slop jar?”
One jokester in the crowd told of riding a Segway for the first time. He went on to say, “And then there was the Hogway.” I took the bait, “What’s a Hogway?” I asked. “Oh, I’d reckon about 300 lbs.”, he laughed.
One of the highlights from my visit to Tunica was that my son and his wife traveled from Nashville to spend a few days in Tunica while I was there. We had a great visit. In 27 years of my poker career, this was the first opportunity he had to sweat me at a final table. His presence led to a conversation about our kids and grand kids. Of course the phones and pictures all came out. One gentleman drawled, “Ya’ll know that insanity is hereditary, don’t you? You get it from your kids!”
One player was a cigar chomper. Of course he couldn’t light up at the poker table, but he chomped. One player asked him if that was a Cuban cigar. “Indeed,” he said, “It is a $4.50 Cuban cigar. You can get one right over there at the Steakhouse for $15.00!”
One gentleman got a text that bothered him. He reminisced, “Things have changed so much! I remember one day in high school shop class; the teacher saw a deer out the window and it was deer season. He asked if any of us had a gun. About half the class did. We shot that deer and had it completely dressed and ready for the freezer or the stove by the end of class. My grandson just got sent home from school for having a nail clipper with a nail file on it.”
I met Sandy Brown from FL at Tunica and she had the greatest purse hanger I have ever seen. It is sturdy. I have had plenty of purse hangers in my day and they all break or fall to the floor, not these! Check it out, www.mypokerplace.net. She even has them with watches on them! Neat gift for the female poker player. I have been using mine since Tunica and won’t leave home without it!
Paul Dutch was the Tournament Supervisor at the Horseshoe for our SPT events, often running interference for three events simultaneously. I asked him if it was driving him crazy. “Not at all, ” he exclaimed, “I have great help and I work the WSOP. Comparatively, this is a cake walk!”
Where ever the Senior Poker Tour takes us next, I hope you will join us. We have a lot of fun and make new friends.